In my opinion North Shore is the greatest film of all time.
Released 14 August 1987, the film is a 80s cult classic about friendship and surfing – as well as earning and offering respect, learning from each other and a reminder not to take life too seriously – not everyone makes it pro.

I watched this movie endlessly in the 90s after buying the only copy from the local video store when it closed down. The movie, the music, the culture all resonated with me and was a perfect fit in a period of my coming-of-age. Living in the UK only a few miles from the coast I spent every summer surfing and mucking around on the beach with a group of like-minded friends. North Shore was always in the VHS playing in the background and we would constantly quote Turtle’s lines. Yeah.. No!

The movie celebrates it’s 30 years anniversary this year (2017) and I’m approaching 40. I studied art and design for 5 years, then forged a living in the design industry before setting up my own design company and small surfing business. I’ve also been lucky enough to have travelled the world living and breathing surfing – taking the values of North Shore with me.

William Phelps and Co. did a fantastic job, the surfing cinematography is truly amazing for the era, the pro surfers of the 80s grant the movie kudos. Yes, the love storyline is cheesy, the one-liners are just stunning, but that is exactly what makes the movie all the better and everyone who watches it takes a one-liner or two with them to the beach.

The Peak… The Dream… The Ultimate Test.

On a small stretch of coastline as powerful as a man’s will, Rick Kane came to surf the big waves. He found a woman who could give him courage, a teacher who would show him how to survive, and a challenge unlike any other.

Before entering art school next autumn, Rick sets out to spend the summer surfing at Hawaii. He knows nothing about the local habits, what causes him some starting problems, but by chance he gets a room in the house of guru Chandler. He teaches him the difference between ‘soul surfers’ and those who surf for fame and money. Also he manages to get the attention of a beautiful young native Hawaiian girl which brings local hostility to his shores.

I spent several years buying CD imports from Australia and USA and writing countless emails to all the below artists – these were the days before iTunes Music Store! I finally completed the full list in 2006. Please agree to purchase the music off iTunes where available.

Researching the title track North Shore Roar was an especially poignant journey. I soon found that the artist Paul Delph died of aids in 1996. Paul’s Mum told me he was very proud to be part of the movie and Paul kept a signed framed poster of the movie in one of his rooms in his house. She also kindly released this track to me in 2002 – it’s from a tape recording Pauls friend Andy kept, digitized and sent to me. If you download the song please donate an iTunes amount or more to (RED) aids charity.

Download Album – only if you agree to purchase available music on iTunes.

In previous years the cast have met up. Will the cast of North Shore meet and celebrate the 30th anniversary of the movie?

On a recent balmy evening, actor Gregory Harrison sat with surf legend Peter ‘PT’ Townend to discuss the 30-year anniversary of North Shore. In the film, Harrison played Chandler – a wise ‘soul-surfer’ who takes young Rick Kane under his wing. And with a salt-n-pepper goatee/hair combo, Harrison projected the same sagacious air of his famed role.

“The character was based on yourself, somewhat, wasn’t it?” PT asked.

“It really was,” said Harrison. “When I started surfing, I was drawn to the solidarity of it, almost like a religiosity. It was a time before Surfline and you really had to build your life around it, you know, figuring out swells and winds, and getting in the car to go out and find waves. It’s my drug. If they had a 12-step program for surfing, we’d all be in it. [Laughs.] But there shouldn’t be; although sometimes my wife thinks otherwise.”

Ultimately, that surfing background helped Harrison land a leading spot in 1987’s North Shore. “I thought, ‘this is great,’” Harrison said. “Go over to Hawaii, have Da Hui clear the lineups for us, and surf. But who knew that 30 years later, people would be coming up to me and quoting my lines that I’ve since forgotten.”

After three decades, Harrison is still in touch with his costars, including Gerry Lopez, Matt Adler (Rick Kane), and the endearing numbskull, Turtle, played by John Philbin. “What a great performance that was,” Harrison said of Philbin. “Turtle was based on a real guy, and John went out three weeks early to spend time with him, studying him, learning the pidgin dialect.” And in between acting gigs, Harrison still goes on surf trips – one recently with Alder to the Mentawais – where he was asked to recite “Chandler” lines in exchange for priority on set waves.

“It wasn’t a hit at the time,” Harrison disclosed about the film. “Universal was really unhappy with the response because it didn’t tap into the middle of America. But today we still get packed audiences for screenings with people dressed as the characters. We didn’t expect that. It was one of those that really snuck up on us.”

In other words, a timeless piece of surf and cinema nostalgia. 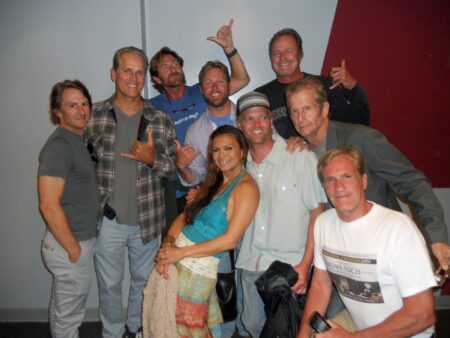 Rick: So this is where you work Turtle?
Turtle: Only when da surf’s bad, Barney. Cause’ when da surf’s good, nobody works!
Turtle: Stay loose, haole.
Rick: What’s a haole?
Turtle: A tourist, a mainlander, like you.
Rick: I’m not a tourist.
Turtle: Whatever, Barney.
Rick: What’s a Barney?
Turtle: It’s like Barno… Barnyard… a haole to the max, a kook in and out of the water. Yeah?

“What ya going to do, snake him”

“That board looks familiar, what ya do, buy it used” 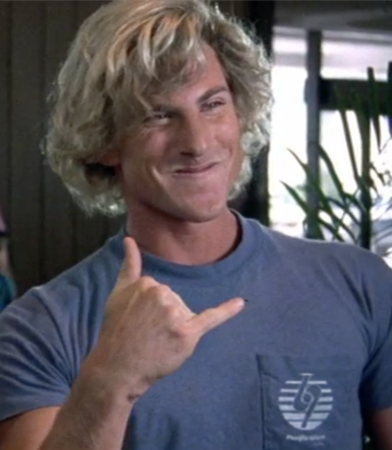 Buy a copy of this shirt on the shop!

Laird Hamilton’s adoptive father Bill Hamilton was a surfboard shaper and glasser on Oahu in the 1960s and 1970s and owned a small business handmaking custom, high-performance surfboards for the Oahu North Shore big wave riders of the era, similar to the character Chandler in the film. In reality, Laird is a big wave rider and loathes competition like the Chandler character does. 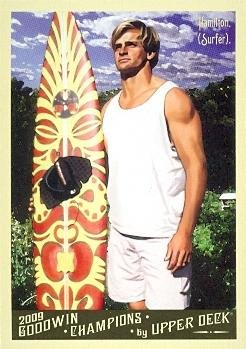 Before John Philbin could land the role of Turtle he had to convince the producers he could pull it off. So he flew to Hawaii for a few months prior to principal photography to get in shape, learn to surf, and perfect the local accent so his pidgin would sound convincing. He got so into surfing that to this day he still surfs and helps operate a surfing school.

As seen on the most recent DVD release of the film, originally the role of Kiani was played by another actress. However when she didn’t work out they brought in Nia Peeples to re-shoot all her scenes. The film’s original ending can be seen in the special features of the DVD.

Matt Alder, Gregory Harrison, and John Philbin actually did their own surfing while the pro surfers were used as stunt doubles for the more difficult manoeuvres.

The late singer/ukulele musician Israel Kamakawiwo’ole starred in the movie. He’s best known for his song “Somewhere Over The Rainbow & What A Wonderful world”. 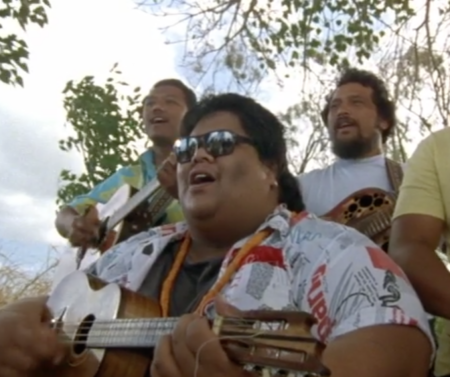 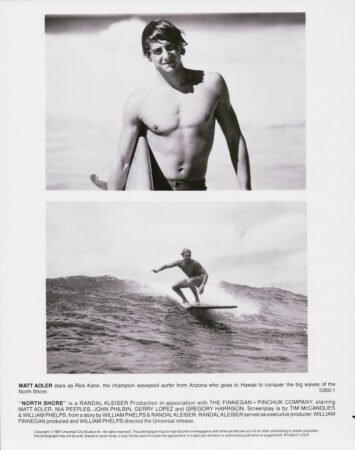 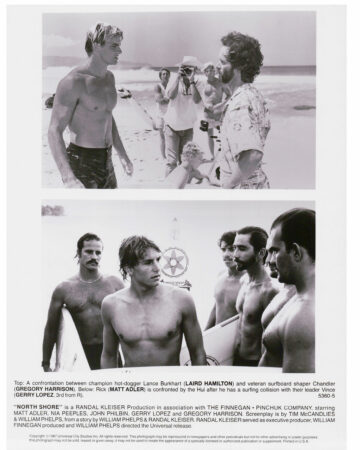 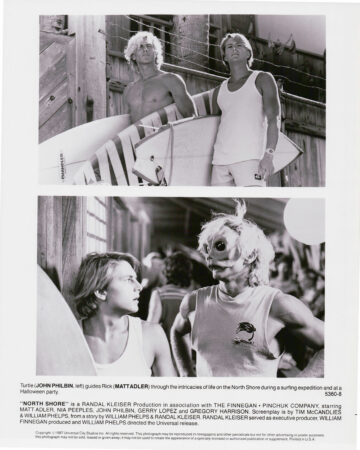 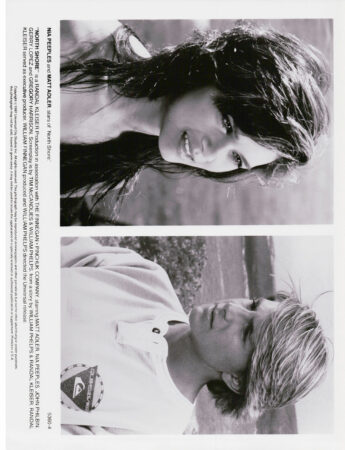 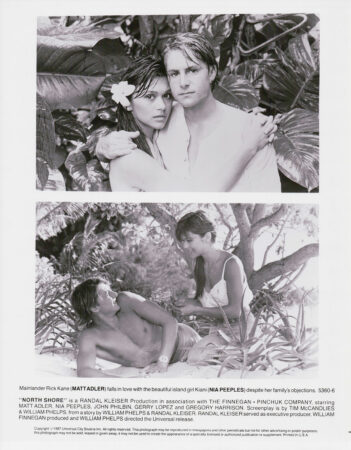 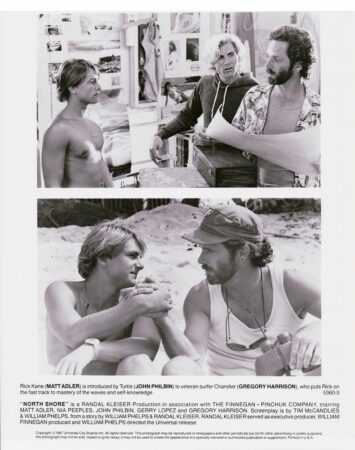 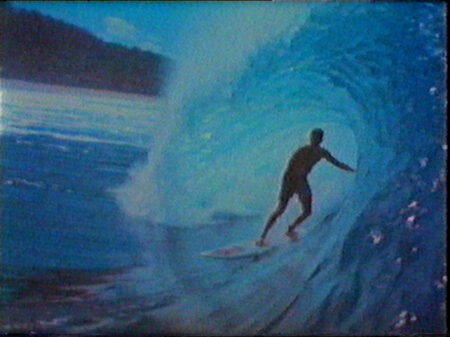 The painting by Rick Kane 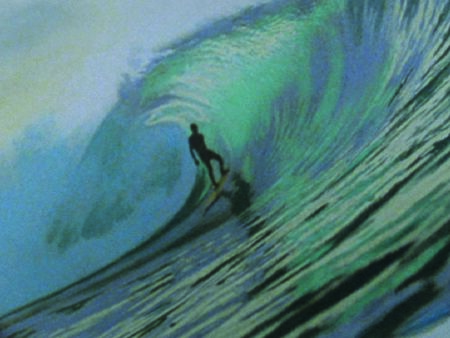